Portuguese breed recognized by the FCI 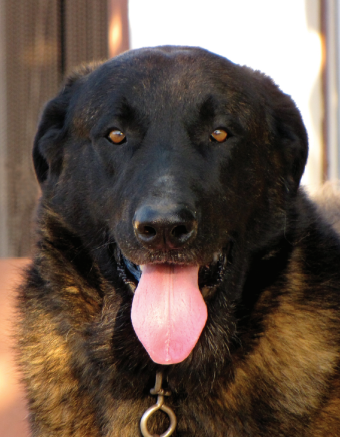 Since remote times, this dog has developed and settled in the Estrela Mountains area, its true origin being lost in time. Nevertheless, it can be considered one of the most ancient breeds in the Iberian Peninsula.
It can be found from the foot of the mountains to the summit (approximately 2000 m), mainly in the summer, after the snow has melted, when the green pastures are much sought after by the herds, because the excessive heat has dried the grass on the lowlands. The progressive recognition of its aptitudes has led to its diffusion throughout the world since the second half of the 20th century.

Inseparable companion of the shepherd and faithful flock guardian, bravely protecting it against predators and thieves. Wonderful farm and house guard, distrustful towards strangers and typically docile to its master.

Large, mastiff-type molossoid dog. There are two varieties of coat: long and short. Rustic, substantial, with brisk gait and an impressive attitude.
The breed has a lively, calm and expressive look; it is well proportioned; well made with harmonious appearance, which is traditionally how the breed has been recognised since a long time.

Moderately long (sub-longilinear), tending to mediolinear. The depth of the chest is less than half the height at withers. The muzzle and skull should be approximately the same length; if not, the skull should be slightly longer.

Nose: Straight and in line with nosebridge; well opened nostrils; large and black.
Muzzle: Long, tapering to the tip, without being pointed; tends to be straight but very slightly convex at the tip.
Lips: Well developed but not thick, well overlapping, not pendulous; mucous membrane of mouth, palate and edges of lips with intense black pigmentation.
Jaws/Teeth: Clean cut mouth with well developed jaws; full dentition with strong, white, well implanted and close-fitting teeth, preferably with scissors bite, pincer bite acceptable.
Eyes: Medium sized, tending to small, oval shaped, level set, equal in size and well open, with a keen and calm expression; preferably dark amber in colour. Close fitting lids with black rims. Eyebrows slightly apparent.
Ears: Set on at medium height; hanging, carried falling backwards and laterally against the side of the head, with inner edge visible (so called rose-ear); thin, triangular, rounded at the tip; small in comparison to the body.

Short, straight and thick; well set and well connected into the shoulders; with a slight dewlap, not exaggerated.

Topline: Straight. Almost level.
Back: Preferably short, well muscled.
Loin: Short; broad; well muscled; well connected to the croup.
Croup: Slightly sloping; short, broad and muscled. Height at croup should be equal or slightly superior to the height at the withers.
Chest: Broad; deep; well sprung without being cylindrical; well let down to the elbow or slightly below it.
Underline and belly: The underline should rise gradually but smoothly from sternum to the groin; belly not too wide, in proportion to the animal’s substance and harmoniously connected to the body.

Set on at medium height; long; thick; carried below the horizontal, scimitar-shaped, with a hook at the end.
At rest it hangs naturally between the thighs, reaching at least the hock; when excited and in motion, the tail rises above the horizontal, curving upward and forward, sideways and downward, without being carried over the croup. It should be well furnished with hair, and feathered in the long-haired variety.

Forearms: Straight, parallel, long, with strong bone and almost cylindrical in shape.
Forefeet: Proportioned, neither too round nor too long, between cat and hare feet (not splayed); thick, tight toes with abundant hair between toes and pads; dark nails, preferably black, well developed; pads thick and hard.

Hock: Slightly let down; moderately open, neither turned in nor out.
Metatarsus (rear pastern): Vertical, almost cylindrical. Possible presence of single or double dewclaws.
Hind feet: Identical to the forefeet.

HAIR: Strong, very abundant, slightly coarse, without excessive harshness, the texture is similar to goat hair. The undercoat is composed of fine hair, short, abundant and entangled, normally lighter in colour than the outer coat.
Long-haired variety: Straight or slightly wavy top coat, uneven in some areas. It is shorter and more dense on the limbs, below the elbows and hocks, as well as on the head; on the ears, it becomes gradually shorter from the base to the tip, becoming thinner and softer.It is longer on the tail, which is bushy, thick and feathered, around the neck and throat and on the buttocks, which are abundantly feathered, as well as the back side of the forearms.
Short-haired variety: Short hair, evenly distributed over the body, slightly shorter on the head and limbs, without feathering.

COLOUR
The following colours are accepted and considered typical:
Solid: Yellow, fawn and grey in all ranges of colour intensity.
Wolf Grey: Fawn, yellow and grey tones, commonly in lighter and darker shades.
Brindle: Fawn, yellow or grey base colour with blackish brindling. In the cranium-facial area, a black coloured mask is typical.
White markings are admitted only at the extremities of fore – and hind feet and on a small extension on the lower region of neck and chest.

Any departure from the foregoing points should be considered a fault and the seriousness with which the fault should be regarded should be in exact proportion to its degree and its effect upon the health and welfare of the dog.

Appearance: General bad appearance, thinness or obesity.
Height: Outside the limits set by the standard, but within 2 cm tolerance at the upper limit.
Head: Narrow, long and pointed.
Eyes: Light coloured.
Ears: Incorrectly set, too long, thick or rounded tips. Hanging completely flat.
Tail: Carried over the back. Absence of hook.
Colour: Absence of dark mask.

Notes:
Any dog clearly showing physical or behavioural abnormalities shall be disqualified.
N.B.: Male animals should have two apparently normal testicles fully descended into the scrotum.