Portuguese breed not recognized by the FCI 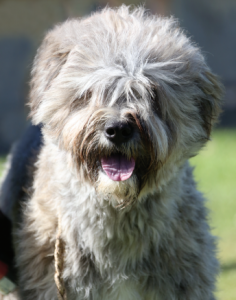 At the beginning of the settlement in the Azores Islands, it was necessary to control and gather several species of the newly introduced cattle. Several types of dogs, including some used in the mainland to handle cattle, arrived then to the Azores. The “Barbado” probably evolved from dogs used in gathering wild cattle brought by the settlers as early as the 15th century.
It is important to note that over the next centuries many people commuting with their dogs through the islands must have decisively influenced the existence of the present Barbado.

Loyal companion to its owner, intelligent, easy to teach, joyful, docile and wilful.

Rustic, with a strong and well muscled body, covered with long, abundant and wavy hair.

Strong, massive and in proportion to the body. The longitudinal superior cranium-facial axes are parallel. The length of the skull is slightly longer than the length of the muzzle.

Skull: Medium sized, slightly curved.
The frontal furrow begins approximately at the posterior third of the muzzle, continuing to half the skull. Non prominent eyebrow arches. The occiput is pronounced.
Stop: Slightly pronounced.

Medium sized, strong and well muscled. Well set into the shoulders, carrying the head with dignity.

Medium to low set. Docked by the third vertebra or natural of medium size, not reaching below the hock. At rest it hangs and curves at the inferior tip. Anurous dogs are acceptable.

Agile movement with good drive, allowing sudden changes in direction and transition between gaits.
Walks with a slight roll of the back, at an elastic trot with good reach and suspension. The gallop is energetic and fast.

Long, dense, slightly wavy, neither straight nor curled, with abundant undercoat all over the body. The working clip, consisting of shortening the coat evenly, must be used in conformation dog shows.

HAIR: Strong, slightly thick but not harsh. Dense in the whole head, muzzle and over the eyes, covering them. Abundant in the jaws, forming the beard that gives the breed its name. On the limbs the hair is abundant, including between the toes. It is also abundant on the tail down to the tip.
COLOUR: Yellow, grey, black, fawn and wolf grey in pale, common and dark shades. White markings are acceptable on the forefeet, hind feet or both, chest, belly and tip of tail; can have a white blaze (on the head) and/or a white collar.

Any departure from the foregoing points should be considered a fault and the seriousness with which the fault should be regarded should be in exact proportion to its degree and its effect upon the health and welfare of the dog.

Behaviour: Shyness and aggressiveness.
Nose: Marbled.
Muzzle: Pointed and narrow.
Coat: Soft and without undercoat. White markings outside the limits set by the standard.
Height: Over 60 cm or under 48 cm.
Gait: Without reach and drive.

Notes:
Any dog clearly showing physical or behavioural abnormalities shall be disqualified.
N.B.: Male animals should have two apparently normal testicles fully descended into the scrotum.